Petrobras, the national oil and gas company of Brazil, handles exploration, production and distribution of the country’s oil and gas resources. The company will be able to continue to increase its reserves thanks to strong investments in technology.

On April 21, Brazilian state-controlled oil company Petrobras began operating the giant P-50 oil platform in the Campos basin off the coast of Rio de Janeiro. Just over 50 years after the company was created by President Getúlio Vargas, Petrobras became the largest company in Latin America, with a strong global presence. Furthermore, the company has helped insulate Brazil from global oil shocks which contributed to the country’s economic difficulties in the 1970s and 1980s.

Even before the P-50 platform began operating, Brazil’s oil exports had been on the rise and, according to Petrobras’ projections, Brazil’s revenues from oil exports should reach USD 3 billion this year. In an age when most other oil producers have seen their reserves diminish, Petrobras has steadily expanded its own and is expected to continue to do so throughout the coming decade.

According to the company’s projection, Petrobras will see a 7.7% growth in oil and gas output in the coming year. "Very few companies can maintain this sort of long-term growth rate," investment bank Merrill Lynch said in a recent report.

At a depth of two kilometres

While Brazil has vast natural resources, much of its oil is located in hard-to-reach locations. "Most of our oil discoveries are in deep and ultra-deep water which has made exploration and production a major challenge," said Tuerte Amaral Rolim, Petrobras’ Manager of Process Technology. Rolim says that, as a result of extensive company efforts in developing technologies that allow it to successfully find and extract oil from deeper and deeper waters, the company has become a world leader in this area.

"Our initial goal was to extract oil from a depth of around one kilometre," said Rolim. Once that goal was attained, the company began working to extending that depth to two kilometres which the company has also achieved.

"Although we have reached our goal, we continue to strive to operate at increasingly greater depths," said Rolim.

He also said that one of the technologies that the company is currently working on is underwater separation of heavy oil. This is still at the test stage but, if it is successful, the company will be able to reduce costs and environmental impact by keeping the water separated from the heavy crude as close to its origin as possible. 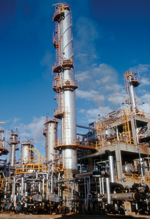 Alfa Laval is an important partner for Petrobras in its oil separation efforts, according to Rolim. He added that Alfa Laval has contributed to the efficiency of the separation process which cuts costs and reduces the risk of environmental contamination.

Rolim said that Petrobras is now focusing on natural gas extraction from deep and ultra-deep waters. "Petrobras, together with its partners, has made several important natural gas discoveries in recent years, but they are all located far from the coast, in regions that make extraction challenging," added Rolim.

According to the head of Gas and Energy at Petrobras, Ildo Sauer, the company expects to double its natural gas production through 2011 and will supply 70% of domestic natural gas demand. This will reach 100 million cubic metres per day by 2011.

Petrobras, together with its partners British Gas (BG) and Petrogal, recently announced the discovery of a significant volume of light crude in the Santos Basins at depths of 2,140 meters. The discovery is unique in that it is located below a thick layer of salt under the sand and rock found at the ocean floor.

In addition to investments in exploration and production, Petrobras has been investing heavily in biofuels. The company plans to invest in biodiesel plants that are expected to produce 855 million litres a year by 2011. And in addition to its investments in conventional biodiesel production plants, Petrobras has patented a new technology, called H-Bio, for producing high-quality diesel using 10% vegetable oil in the refining process at a cost well below that of producing traditional high quality diesel.

"In developing this technology, we are facilitating a great advancement in the energy independence of Brazil, and also in the area of diesel," Petrobras CEO José Sergio Gabrielli said during the test production of new biodiesel. H-Bio could be used by city bus fleets to improve urban air quality because of its low sulphur content.

Petrobras also makes large investments in ethanol. The company does not plan to enter the production side, but is looking to expand logistics. The company’s transportation subsidiary Transpetro plans to invest USD 600 million in the development of an ethanol export corridor. Petrobras expects its ethanol export capacity will reach 8 billion litres by 2011, up from current levels of 2 billion litres.

Likewise, the company has invested in technology which will allow it to refine the heavy crude produced in the Campos Basin into basic petrochemicals, reducing the country’s dependence on imported feedstock for the chemicals industry.

To maintain current levels of growth, Petrobras has laid out an ambitious investment program. During the five-year period beginning in 2007–2011, Petrobras plans to invest a total of USD 87.1 billion, a 66% increase over the company’s previous five-year plan.

Nearly half of these investments will go toward exploration and production (E&P). This is key for the company, and Brazil, in maintaining oil self-sufficiency, Petrobras CEO José Sergio Gabrielli said in a recent meeting with analysts. Gabrielli also said that the company is seeking to increase its production of light crude in an effort to reduce imports.

The company is also seeking to reinvigorate its network of oil refineries in an endeavour to reduce the company’s imports of diesel and oil derivatives such as naphtha. Overall, the company also plans to increase its downstream investments by 62% to USD 23.1 billion.

Petrobras recently completed the overhaul of the Alberto Pasqualini Refinery (REFAP), located in the southern state of Rio Grande do Sul. With the investments, the REFAP refinery will increase its heavy crude processing capacity to 80% from 20%.

"An important part of the upgrading of our refineries is to exchange old processing equipment for new corrosion-resistant equipment that can cope with very heavy and acid crude oil," says Washington Geraldelli, Consultant Engineer at CENPES, Petrobras’ research and development centre that also is responsible for technical design and engineering of the company’s plants. "Alfa Laval proved to be a suitable supplier of such equipment."

It was particularly Alfa Laval’s fully-welded Compabloc plate heat exchanger, performing duties such as heat recovery, condensation and reboiling that attracted Geraldelli’s interest when he visited refineries in Europe a few years ago. "The Compabloc resists corrosion, has a compact design and is very energy-efficient, so it suits our needs perfectly," adds Geraldelli. "Since it also improves heat recovery, it helps us in our endeavours towards "greener" refineries where the amounts of cooling water can be reduced."

The first Compabloc was installed in the REPLAN (Paulinia) Refinery in 2001, and since then a large number of units have been installed in several Petrobras refineries including the Henrique Lage Refinery (REVAP). "We want to extend the use of Compabloc in our processes, so we are now testing it for completely new applications," says Geraldelli.

In addition to the overhaul of its Brazilian refineries, Petrobras is also seeking to continue to expand its refining activities overseas. The company is considering acquiring a refinery in Japan and in September it concluded the acquisition of a 50% share of the Pasadena Refinery from Astra Oil.

Petrobras is also expanding in exploration and production worldwide and is now present in 18 countries worldwide. The company decided to expand abroad in an effort to diversify its portfolio and to generate growth opportunities. The strategy has paid off and the company plans to invest USD 12.4 billion in its international operations through 2011.

Petrobras expects its production to increase to 2.8 million barrels of oil per day in 2015, up from 1.8 million in 2006, contributing to the local economy and also to Brazil’s sustainable development.

Alfa Laval has cooperated with Petrobras for more than 20 years supplying the company with a broad range of equipment for offshore and refinery applications such as heat recovery, oil treatment and water desalination.

For example, last year Alfa Laval received an order from the contractor QUIP S.A. to a value of approximately USD 10 million for some 20 large-capacity plate heat exchangers to be installed on Petrobras’ P-53 platform. The plate heat exchangers will be used to heat the untreated oil before separation and to cool the treated crude oil as well as the separated water.

"Petrobras’ expansion and modernization on the refinery side has resulted in an in increased interest in our compact solutions such as the Compabloc and Packinox plate heat exchangers, and our business and cooperation with the company is increasing year by year," says Marcos Matsufugi, Sales Engineer at Alfa Laval’s Refinery & Petrochemicals market unit in Brazil.

In addition to the heat exchangers, Alfa Laval also provides systems for desalinating sea water for its oil platforms. Given the large number of people who work on the platforms, fresh water supply is a key issue, according to Luis Souza, Sales Manager, Energy & Environment at Alfa Laval in Brazil. Alfa Laval also offers separation equipment that treats the diesel fuel used to operate the generators on the oil platforms. 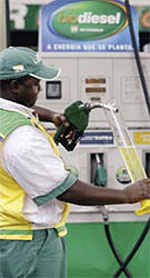